The Zimbabwe German Society hosted a two-man exhibition of paintings, drawings and graphics by emerging visual artists Richard Mudariki and Mukudzei Muzondo on the 5th of April 2010. The exhibition, which was officially opened by the Cultural attache at the German Embassy, Petra Schimdt, included exciting artworks  art that are not only aesthetically appealing but that also catch the attention of the viewer. They also explored various and exciting techniques in an expressive manner, ideas media and themes. 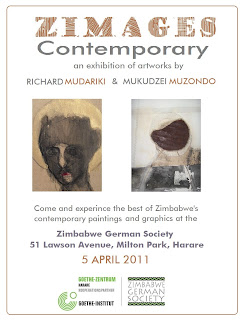 The exhibition was a visual representation of each artist’s reflections of Zimbabwe’s past, present and hopes of the future. The artworks mirrored the society that the artists live in, reflecting through visual images, its aspirations, concerns, fears and hopes. An engagement and exploration of a variety of media and techniques in present in the artworks in this show. The two artists believe that creating art provides the greatest freedom of self expression. There are no boundaries or limitations. Artists are free to communicate their visions, dreams and interpretations. In their work, they overcome fear of ridicule and can be daring and foolish.


The exhibition ran for a week at the society.
Posted by Unknown at 5:51 PM