Zimbabwe at the 55th Venice Biennale


Considered  to be the Olympics of the visual arts, the Venice Biennale is a few weeks away.The art world biggest event kicks off on the 1st June and runs until November 2013 in Venice, Italy. Zimbabwe, one of the 3 African countries at the event, has selected five artists to represent the country at the 55th Venice Biennale, Italy. According to the National Gallery's Facebook Page, it seems all is set.

The five-month exhibition will see Voti Thebe, Rashid Jogee, Virginia Chihota, Portia Zvavahera and Michele Mathison exhibiting at Zimbabwe Pavilion in Venice, Italy. Speaking to the Curator of the Pavilion, Raphael Chikukwa some weeks ago, he said in the selection of the artists, care was made to represent different religions, races and gender in the mix of the artists. I was pleased to see the inclusion of Virginia Chihota and Portia Zvavahera, two emerging female visual artists who l believe are going to be very successful at the Biennale.

I wish all the artists all the very best and look forward to another successful showcase of Zimbabwe's finest visual art. 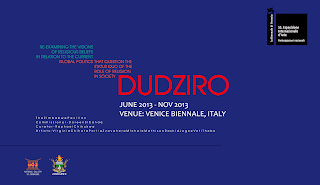